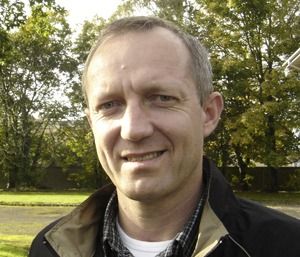 I was born on the 15th of January 1965, in Hurbanovo, the closest Maternity hospital from my native village Dulovce in south-west of Slovakia (former Czechoslovakia). I was the only boy and the youngest in my family. I have two older sisters living in Slovakia. My father died in October 2009 at the age of 83. At the time I was already working in St. Brigid’s Parish in Kildare Town. My mother Anna celebrated her 85th birthday this year in July.

I entered the diocesan seminary in Bratislava in September 1987. It was the time when the Communist regime had ruled and controlled the whole country of former Czechoslovakia. Those who opposed the oppressive regime were persecuted and many put into prison. The Church was under strict control and many active priests and the few Bishops who were not approved by communist party could not exercise their ministry but went to the “Underground Church”. This was the first time I had got in touch with the “Underground Church”. In November 1989, the leading Communist party resigned under the pressure of the whole nation; demanding freedom of speech and free elections – including religious freedom for the whole Church in Czechoslovakia. This historical upheaval of the country was known as the “velvet revolution” as there was no bloodshed during the public protests and strikes.

In September 1988, I had secretly joined the religious missionary congregation known as “Divine Word Missionaries” and was doing my novitiate during my free time in the seminary. We had to change the places of meetings often as we were risking to had been dismissed from the diocesan seminary if they found out our activities.

On the 8th of September 1990, I had taken the first temporary vows in the Divine Word Missionary Congregation in Nitra. At this time the Church was exercising full freedom and the next day I had travelled to Ireland to learn the English language with another two students and one priest – all members of the Divine Word Missionaries. After four years I had completed my theological studies and the formation at the Kimmage Institute of Theology and Mission. I also attained the Graduate Diploma in Humanities in Holistic Development at All Hallows College in Dublin. In May 1994, I took my final vows in the Divine Word Missionary Congregation in Donamon Co. Roscommon. I received my first missionary appointment to Brazil North (Amazon Region). On the 22nd of October 1994, I was ordained priest in Nitra by Cardinal Ján Chryzostom Korec who was the Bishop persecuted and imprisoned by Communist regime. I was waiting on year for the visa to go to Brazil North, to the Amazon region to assume my mission there. Meanwhile I was working in different pastoral areas in Slovakia.

In the summer in 1995, I obtained the visa to Brazil and travelled to Brazilia the capital city of Brazil to take the CENFI course, learning language and the culture of Brazil. In February 1996, I travelled to my final destination to the Amazon Region. There I worked for 6 years in the parish of the Most Holy Trinity in Rurópolis, the state Pará, Brazil-North. It was a real missionary life with all the challenges, starting with hot humid tropical climate, tropical diseases, no roads, no electricity, no basic infrastructure, very poor health care and education in the schools, huge corruption and very poor people. The parish was looking after 85 small Basic Christian communities scattered in the Amazon rain forest. Each community was visited by a priest and celebrated mass only twice or three times a year.

In September 2001, I returned to Slovakia due to health problems. I was transferred to Slovak Province and later I was asked to take the position of the University Chaplain at the UPC (University Pastoral Centre) in Bratislava. It was the most demanding and at the same time the most rewarding pastoral work which I have done in my missionary life. I was very involved in the RCIA where a lot of young students expressed their desire to become Christians as it was not possible freely during the Communist regime in the past.
I spent another six years there until the summer of 2007. Then I asked the Provincial Council in Slovakia to do sabbatical year in Ireland as I knew the people and the SVD confreres including the country well due to my studies here from 1990 to 1994.

The permission was given to me and in 2007, I had taken the few months of theology and spirituality courses at the Milltown Institute in Dublin. There was a great need for the pastoral care of migrants living and working in Ireland. I was contacted and asked by the Bishop in Slovakia to minister with the Slovak migrants until he could find a suitable priest to send to Ireland. I started to organise Masses and pastoral activities with the Slovaks at Saint Saviour’s Catholic Church, Dominick Street, Dublin 1. It was the great need at that time, and I could contribute to help the Slovak community integrate into the fast-changing Irish society.

In the summer 2008, the provincial of the Irish-British Province Fr. Brian O’Reilly SVD, asked me to consider working in the Diocese of Kildare & Leighlin at the request of Bishop Jim Moriarty. I accepted the offer to work as the Curate in St. Brigid’s Parish, Kildare Town, with Fr. Adrian Carbery PP. He was very helpful and supportive, and we got on very well together with our Parish team. I was given permission to continue my pastoral outreach to the small Slovak communities in Dublin, Cork and later Waterford and Longford. I have been working in St. Brigid’s Parish Kildare, Nurney and Kildangan for the last 12 years until my present appointment by Bishop Denis Nulty to work as Curate at the Cathedral of Assumption in Carlow alongside the Administrator of the Cathedral Fr. Thomas O’Byrne and my confrere from China Fr. Chen Yanbo SVD who will also assist the wider area in Carlow. This is the first time where we two SVD priests, myself from Slovakia, Fr. Yanbo from China and Fr. Thomas from Ireland will work together as an international team, sharing our faith and mission together with God’s people in Carlow, the diocese of Kildare & Leighlin.

Please pray for us all, that we will have all the gifts of the Holy Spirit to continue the mission of Jesus Christ who sends us to bring the Good News of Salvation, Love and Mercy to his people especially at this difficult time of the pandemic virus, Covid19.

May the heart of Jesus live in the hearts of all and make us all one in Him.