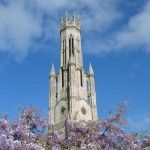 The Cathedral has been the Mother Church of the diocese of Kildare and Leighlin since it was built in 1833. It is also the parish church of the Cathedral Parish, the place where people gather to celebrate liturgies, to worship, and to share the joys and sorrows of the Christian community.

Each year many join our faith community through Baptism, children celebrate First Holy Communion and Confirmation, and couples make their commitment in the Sacrament of Marriage.

At the heart of our worship is the daily celebration of the Eucharist. From early morning to late evening, people come to the Cathedral for a quiet moment of prayer and reflection. Situated in the centre of Carlow town, the Cathedral is a real ‘oasis of peace’ in the midst of the busyness of everyday life.

The parish seeks to be a place of welcome and hospitality where people can share their gifts and talents, and where the faith of its people is manifested in deeds as much as in words.

History of The Cathedral

The tradition of the four lakes, and perhaps the lakes themselves, existed in the late eighteenth century. King Cormac, who died in 567, made a grant to St. Comgall of three towns in his territory, one of which was present-day Carlow, where the Saint established a monastic church. Brewer, in his “Beauties of Ireland,” refers to an Abbey built by St. Kieran near Carlow c.634. An old ecclesiastical building and burial ground survives at Castle Hill, Carlow, tradionally known as St. Mary’s Abbey. St. Mary’s Church of Ireland marks the site. A chapel from the penal period existed between Carlow College and the Dublin Road. In 1787 Dr. Henry Staunton, Parish Priest of Carlow, built a sizeable Church on the later Cathedral site.

Bishop James Doyle (’J.K.L.’) laid the foundation stone of the Cathedral on March 18th,1828. Dr Doyle is regarded by most historians as the outstanding Bishop of the 19th Century. Mr. Thomas Cobden, a noted 19th century architect, designed the Cathedral, which became the first to be built after the Catholic Emancipation. He pioneered the Gothic revival in Ireland and designed many churches in the Midlands. For the Cathedral he drew his inspiration from European examples, most notably the Beffroi Tower in Bruges.

Read more about the Cathedral

The Cathedral was completed in 1833 at the cost of £9,000 and the old church was demolished. Part of its transept walls were retained and incorported into the new structure. The greyish-blue stone used came from a quarry on the Carlow-Tullow Road. The White granite used came from Col. Bruen’s quarry at Graiguenaspidogue. The Oak for the great-framed roof came from nearby Oak Park. The Cathedral is a handsome mixture of Gothic revival styles and was a tower of 151ft. The windows are early medieval in style while the low pitched roof has a late medieval appearance.

The Cathedral was dedicated by Dr. Doyle on the 1st Dec. 1833, and was initially sparsely furnished. In 1834, Dr. Doyle succumbed to a fatal disease, at the age of 48. His remains are buried in the Cathedral. In 1837, John Hogan of Tallow, Co. Waterford, won the commission for the memorial statue to Dr. James Doyle. It was finished in Rome in 1839 and placed in the Cathedral. Later a Holy Family Group, attributed to the same John Hogan, was added and may be seen beside the Marian altar.

Many refurbishments and inprovements took place over the years. Dr. Michael Comerford, co- adjutor Bishop and the noted Diocesan Historian, presented the great bell in 1889. The Cathedral was consecrated on Nov. 30th 1933 by Bishop Matthew Cullen. Between 1949 and 1965 interior and exterior renovations were carried out.

Following a programme of refurbishment and rewnewal conducted under architect Richard Pierce and main contractor James Farrell (Construction Ltd.) the Cathedral was rededicated on Sunday 22nd June, 1997 in ceremony performed by Bishop Laurence Ryan. The most recent refurbishment cost £1,453,616.

Several works of Art were installed – the Ambo by Michael Burke. The Altar and Baptismal font by Michael Hoy. Reliefs on Confessionals by Philip Flanagan. Work by Hughes Sculptors. Joinery work by Breffni Ireland. Guilding by Susan Mulhall. It is fitting that much of the stone for the refurbishment of the Cathedral came from quarries in Old Leighlin, where St. Laserian led the ancient Diocese of Leighlin.