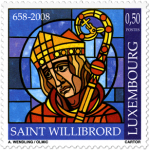 In County Carlow in the townland of Garryhundon is Rathmelsh Cemetery. During the 7th & 8th centuries this was the most important Anglo-Saxon ecclesiastical settlement in Ireland. From 678AD to 690AD Willibrord from Northumbria was trained and ordained here. From here he led other Carlow monks on a major mission to the Frisian Land. He initially built a cathedral in Utrecht, Holland but moved to the town of Echternach in Luxembourg where he founded an abbey. He is buried in Echternach, and he is the only saint to be buried in Luxembourg. At his abbey he also established an important scriptorium where many great European bibles were produced. It is likely that the initial scribes were from Carlow.

Great devotion and religious festivals are still held to this day in his honour and in particular a hopping procession, a dance that dates back to, if not predates St. Willibrord’s life time. The hopping procession takes place annually on the Tuesday after Pentecost Sunday. Over thirty thousand people from over 160 parishes across Luxembourg, Belgium, Holland and Germany descend on Echternach to partake.

After World War 11 the Basilica was reconstructed including the instillation of a stain glass window depicting St Willibrord’s ordination and first mass at Rathmelsh in County Carlow. In October 2009 President Mary McAleese as part of her official state visit to Luxembourg visited Echternach. His Feast Day is Sunday November 8th.

Edited Extract from the Litany of St. Willibrord

St Willibrord, pray for us (repeat after each line)

St Willibrord, passionate interpreter of the teaching of Christ,

St Willibrord, Disciple of Christ, pray for us.